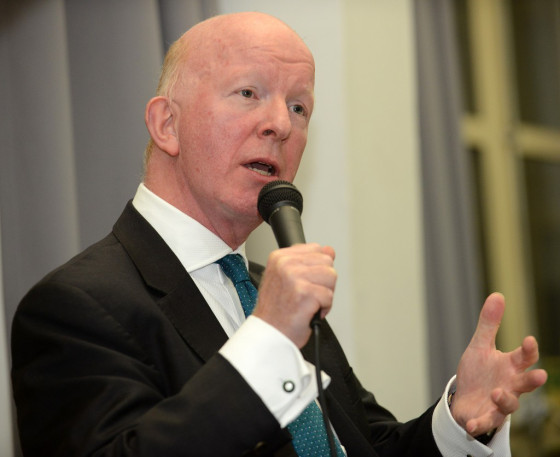 This is our former leader of the Rotten Borough of Kensington and Chelsea, Nick “Piglet-Pie” Paget-Brown.

We call him this because of his being less than truthful when still leader about sprinklers and residents in a BBC Newsnight interview after Grenfell here:

What else did Piglet-Pie do as leader? Preside over plans to socially cleanse parts of the north of the borough while ignoring concerns and complaints from ordinary residents and also receive one of the highest salaries as a council leader for doing so. ignored fire warnings  about Grenfell Tower before the disaster from the Grenfell Action Group and other residents of the Tower and after the fire, presided over a delayed and inedequate response from RBKC which only further exacerbated the trauma suffered by Grenfell victims, their families and many others in the North Kensington local community.

His career as RBKC  leader soon came to an end after the  sorry debacle of a cabinet meeting which he brought to a halt after a High Court ruling allowed journalists in. See here:

So after he resigned, he set up a consulting firm, NPB Consultants,  for  local authorities to work with organisations.

Well we at  THINK believe that Piglet-Pie is one of the last people that other local authorities should wish to consult. His firm supposedly offers seminars, briefings, policy analysis  and drafting assistance. His firm also did state that they offered “strategic  communications”  – which if we weren’t still so angry and traumatised by the council’s response after Grenfell, would imagine to be some terrible excuse for a joke. This has since been removed from his profile.

Nick Paget-Brown has also now announced that he will not be seeking re-election as a councillor next May.  We guess he will be spending more time with his lawyers, but the thing is, he is still a councillor. As he has not been in attendance at recent council meetings (along with former Deputy leader Rock Feilding-Mellen) THINK believe that if he really had any  shred of decency left, he would resign as a councillor too.

We are long  used to him ignoring North Kensington residents, but now he is apparently ignoring his ward constituents in Bronpton and Hans Town Ward  in the more affluent south of the borough  by staying on, accepting a salary and not giving them adequate local representation by not turning up at meetings.

THINK believe that Piglet-Pie  and Feilding-Mellen’s constituents (his are in Holland Ward) deserve full and fair representation and that it is a disgrace to them and to all RBKC taxpayers that these two are “invisible councillors” who think that it is perfectly acceptable to hold on to their backbench jobs and still take a councillors’ salary, while doing next to nothing for their electors and not even  bothering to attend the Town Hall for meetings and votes.

The photo of him  with the microphone above comes from one of his “Ask Nick” sessions that were held when he was leader in which members of the public put various local issues to him  though he appears to us to be singing “My Way” on karaoke in it – which is the sort of crazy response we’d  not be entirely surprised to get  from them.

We’ll “Ask Nick” to resign as a councillor and we’ll “Ask Rock” too…….

THINK and many other residents of the Rotten Borough have had  more than enough of this bad joke of a council  and we will ask people to sign our petition to get Government to put the commisioners in to sort out this whole sorry incompetent mess:

(Maybe Nick Piglet-Pie, now he will have more than enough time on his hands, would like to watch the video below to get some karaoke practice?)