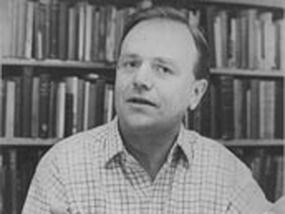 This is the Reverend Bruce Kenrick who founded Notting Hill Housing Trust back in the 1960s. He was concerned about poorer families in our local area and the conditions they were living in.

Back then he set up the trust as he was appalled at the living conditions m which the poorest had to exist. Many of the poor in our area back then had little choice but to live in cramped, overcrowded and squalid accommodation. Kenrick wrote that “What struck me painfully was the extent to which people’s problems stemmed from damnable housing conditions. Marriages broke up because one or other partner could no longer stand the strain of living in one room with a stove and sink squeezed in to one corner”.

He started raising funds (at one point in a stall in Portobello Road Market)  to buy up dilapidated properties in the area at auction, renovate them and then  let them out as decent social housding for many in less privileged circumstances.. In 1966 Reverend Kenrick also set up housing charity Shelter.

Sadly Notting Hill Housing, they dropped the “Trust” in recent times – which says a lot – are  like many other housing associations (such as Genesis, Octavia, Affinity Sutton,  Family Mosaic and many more) are now  very  far removed now from what they were originally set up to be.

NHH’s current chief executive is Kate Davies. She takes a salary of around £200,000 a year. She has deceived council estates as “ghettos of needy people” . Oh wait Ms Davies, isn’t it your supposed remit to help house some of those who are in need? But then she has been a “fellow” of Iain Duncan Smith’s right wing think tank,  and we know that IDS  shows very little compassion for the poor.

Steve Hilditch a former NHH board member from 2002-08 resigned over the policies of NHH under Kate Davies. In an article he wrote on the Red Brick blog he says “provision of social rented homes was downgraded in priority, there were moves into making tenancies conditional (e.g. on seeking work) whilst more and more effort went into shared ownership and private development.

Also now there is an emphasis (thanks to policies of certain Tory governments), on “affordable rent” (80% of market rate) – unaffordable to most.

Yes shared ownership, one of the focuses of Kate Davies and NHH appears to be something that can work out for young soon to be high flyers who are just starting out in their careers, but for  many others it can be unsuitable. Some can even be trapped in a situation where they are paying roughly the same as they would under a mortgage, are subject to the rules of the housing  association and have no means if other parts of the building are in disrepair (such as a leaky roof for example) , of being able to enforce the housing association to make the  necessary repairs.

And yes, Notting Hill Housing is a partner in many  “regeneration” social cleansing projects  such as Sweets Way, the Aylesbury Estate, as well as selling off its own  empty properties in the market that were intended for social rent.

THINK sadly believe that these orchestrated  sell offs land grabs by investors in which several local authorities and housing associations are involved in not only push the poorest out of their communities, but also contribute to pricing many ordinary Londoners out too.

NHH’s “core strategy of providing housing for those who cannot otherwise afford it”? Well they are selling homes over over £1 million, so we don’t exactly know if any  of the supposed people they are supposed to be helping who can exactly afford that.

So with their focus being on ownership and shared ownership, is it too much to ask where they expect those on lower incomes and those who are unable to work to live?

As it is the minimum housing space for a “flat” is just 32 square metres, so there are very obvious concerns about peoples living conditions returning to those of the days before NHH and other associations were set up. We also happen to know a number of families living in cramped and/or overcrowded living conditions under NHH, which are continually ignored by the association. We believe that NHH have completely forgotten their origins altogether and are now real players in the act of actually bringing back  and perpetuating some of the impoverished living conditions which they were set up to combat in the first place.

As for Notting Hill Housing’s original  founder, Reverend Bruce Kenrick passed away in 2007. THINK do not believe that he would at all approve of  Kate Davies and co wrecking his legacy  of a charitable housing organisation and turning it into something of a corporate beast, moving  away from its roots and  his cause of  providing decent housing to those who cannot afford it and instead concentrating their efforts on social cleansing and selling off properties to the wealthy in more affluent areas at the real expense of those who need it most.

As for charitable efforts, after Grenfell, many in our local community from Grenfell Tower and nearby urgently needed housing as our council has a severe shortage of it. But what did Kate Davies and NHH do ? They  delayed and waited alongside other housing associations (“registered housing providers”) for extra public money from RBKC to  the tune of £40million before offering to house survivors. Read this excellent blog post from the Grenfell Action Group here:

We believe Reverend Kenrick will be turning in his grave…….

3 thoughts on “Notting Hill Housing: where has the “Trust” gone?”

This is a text widget, which allows you to add text or HTML to your sidebar. You can use them to display text, links, images, HTML, or a combination of these. Edit them in the Widget section of the Customizer.
%d bloggers like this: