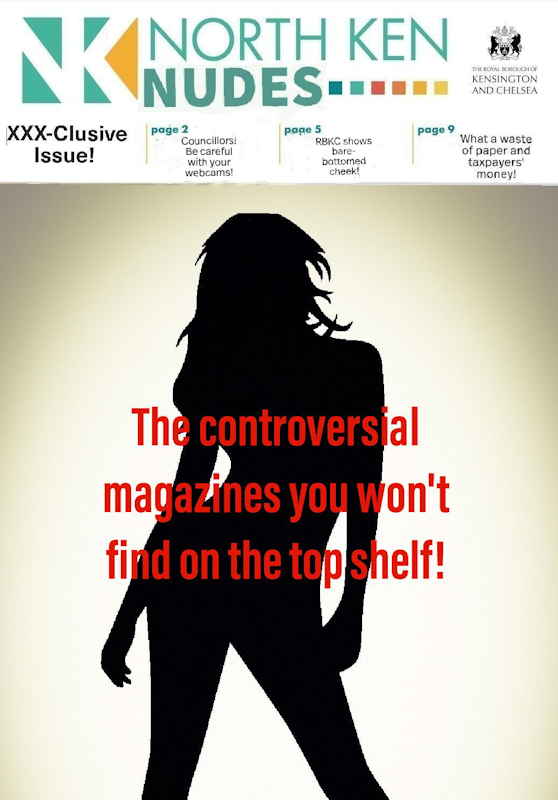 Various different emails that might be considered of interest get sent to our blog, and in a boring long hot Summer of lockdown, people send us all manner of things – some of which unfortunately we cannot share.

We’re sorry that we cannot share everything with our readers – we are a public blog and have a responsibility to be careful and not to get in too much of a spot of bother..

But we are concerned as to what our council decides to share and not to share with residents.

One thing we are bothered about is the question of how much council effort and how much of our public money is being wasted on the RBKC PR magazines and newspapers that keep flooding our doors.

Every month, residents of North Kensington get a copy of North Ken News (which we’ve mocked up a cover of! ) . There is usually very little information usually provided in this – same goes for the other council magazines.

Another thing we are really bothered about and sonething which will bother plenty of other residents receiving North Ken News this month is seeing RBKC’s self measuring of their Grenfell Recovery Strategy in millions – without actually answering directly exactly where all that money is going. Because many locals here certainly have questions about the lack of transparency over the money see this.

We also note in RBKC’s PR self- analysis of the supposed Grenfell Strategy , that they appear to think that affected older residents do not exist……

Anyway, there are far too many of these publications and most of them end up in the bin It is also confusing to the few residents who do read them, where to find what.

So how much do we pay for these PR exercises? Well, they usually don’t say (and an FOI request is likely to get no response) but the council website does actually give the costings of North Ken News (probably because they’re tired of angry residents asking them how much they are wasting on it) – which works out at an estimated total (they might decide to spend more or less later in the year we guess ) of £93,684 per year – on a publication that nobody round here actually wants. Who knows how much all the others cost?

Also not included in North Ken News, Our Borough, Housing Matters. etc (could be here all day listing them) are forms for important consultations and surveys . Like this one, below, on the Scrutiny programme at the council. As well as asking for more council Scrutiny meetings and for the re8nstatement of the Grenfell Recovery Scrutiny Committee, we are also asking that RBKC Communications and PR and spending on this comes under Scrutiny from councillors too. The deadline is tomorrow Friday July the 31st – and we encourage all our local readers to join us in putting their views on Scrutiny too:

RBKC tell us that they put all these magazines out to be inclusive to residents who aren’t online – but then they exclude these particular residents from all the important consultations!

We think that RBKC wasting our money on pointless PR while still neglecting many affected North Kensington residents and then the refusals to listen to and be open and honest with people, is truly what is outrageous and scandalous.

For those who are really interested in goings on at RBKC , local blogs like the excellent From The Hornets Nest are a far better and more entertaining and informative read anyway – and like our blog, costs the taxpayers zilch.